To share your memory on the wall of Willis Pitt, sign in using one of the following options:

Bill was born on a farm near Mair, Saskatchewan on July 23, 1937. At a young age the family moved to Lenore, Manitoba, where his parents ran the small café before moving to Brandon.

Bill worked for CP Rail for 35 years. During the first five years of railroading, Bill worked in several stations as a relief Assistant Agent. From 1961-1967 he was Assistant Agent at Morden, MB. Bill and Helen were married in 1962 and made their first home in Morden. During Bill's years with CP Rail, he was transferred to Brandon, MB (twice), Carman, and Winnipeg, where he retired in 1991. Bill loved to square and old-time dance, play and later watch sports, garden, and spend time with the grand and great-grand children. They had a trailer at Spruce Sans Trailer Resort on Lake Winnipeg for over 20 years. While he was still in good health they took several vacations to Florida, Mexico, Hawaii and throughout the US. In 2011, Bill and Helen relocated to Squamish, B.C. to enjoy the milder winters. Each summer they returned to Spruce Sands and their trailer. After selling the trailer they bought a small motor home so they could travel and visit family and friends in MB and SK.

Arrangements are entrusted to Squamish Funeral Chapel and Crematorium, 40440 Tantalus Rd, Squamish, BC. Flowers are gratefully declined. Those wishing may make a donation to a charity of their choice in Bill's name. Due to COIVD-10, a celebration of Bill's life will be held in Brandon, MB at a later date.
Read Less

Receive notifications about information and event scheduling for Willis

We encourage you to share your most beloved memories of Willis here, so that the family and other loved ones can always see it. You can upload cherished photographs, or share your favorite stories, and can even comment on those shared by others.

Posted May 11, 2021 at 04:48pm
Our deepest sympathy goes out to all of you in the loss of Bill, Audrey worked with Bill in Brandon and her Mom was a neighbor of Helen's Mom in Brandon. We live in Riverview, NB. May he RIP and again our deepest sympathy!
Comment Share
Share via:
D

Posted May 10, 2021 at 06:38pm
My thoughts are with you Helen, I have thought of you and Bill often, since we worked together on Concordia. My deepest sympathy.
Diane Baleja
Comment Share
Share via:

Posted May 10, 2021 at 06:12pm
DEAR Helen and family so sorry to read of Bill’s passing. Always have fond memories of you all. With deepest Sympathy 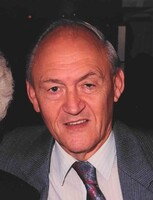