To share your memory on the wall of William Howard, sign in using one of the following options:

Provide comfort for the family by sending flowers or planting a tree in memory of William Howard.

Provide comfort for the family of William Howard with a meaningful gesture of sympathy.

Bill was predeceased by his wife Jean in 1999 and is survived b... Read More
William James Howard

Bill was predeceased by his wife Jean in 1999 and is survived by his brother Ted, daughter Diana (Jim) and son Brian. Dad struggled with his health over the last few years but had been a long-time member of the Lions Club, and proud of his affiliation with both the Ambleside-Tiddleycove and Squamish Lions clubs.

Dad worked for many years in West Vancouver where he and Mom owned and operated Howard’s Paint & Wallpaper. Upon retirement they decided to move to Squamish and built their own home there. In his later years Dad enjoyed his trips to Costa Rica, playing softball and golf. He was an avid sports fan, especially the last few years when his health dictated his participation.

The family would like to thank all those who helped Dad, Dr. Melissa Aragon, the ambulatory care nurses at Squamish Hospital and the home care workers who attended to him.

Dad will always be remembered for his love of a good “party” and was usually the last to leave.

Cremation with no service by request.

Receive notifications about information and event scheduling for William 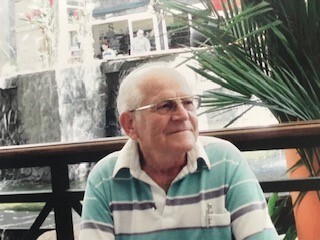 We encourage you to share any memorable photos or stories about William. All tributes placed on and purchased through this memorial website will remain on in perpetuity for generations.

Honor the life of William James Howard by planting a memorial tree.
Plant a Tree in Memory of William
Planted in the area of greatest need

We encourage you to share your most beloved memories of William here, so that the family and other loved ones can always see it. You can upload cherished photographs, or share your favorite stories, and can even comment on those shared by others.