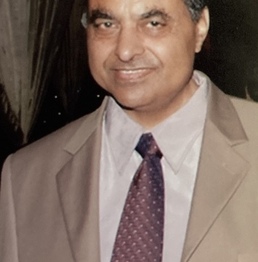 Rajinder Singh Mann of Squamish, BC passed unexpectedly on Sunday May 9th, at the age of 71.

Rajinder Mann was born on October 25th 1949 in the village of Bal Sanda, Dist. Ropar, Punjab. He immigrated to Canada in 1970, settling in Squamish, BC, where he went on to work for the local lumber mill for over 30 years while raising his young family.

He is survived by his wife, Parmjit Kaur Mann; his daughters, Baljit Sidhu (Mandeep), Davinder Sekhon (Lachhman); his sons, Gurdeep Mann(Renu), Jagdeep Mann (Kiran). His memory will forever be honored by his grandchildren; Jovan, Riyah, Viraj, Gavin and Sabrin, to whom their 'Nanaji' and 'Babaji' will remain irreplaceable. Also, he is predeceased by his father, Kirpal Singh Mann and survived by his mother, Gurdev Kaur Mann, along with two sisters and one brother.

Rajinder Mann will be remembered as a soft-spoken and kindhearted man who spent many of his early years helping family, friends, and acquaintances get settled in Canada. His belief in helping people had always remained a priority for him - one that he made sure to pass on to his children and grandchildren. Decades later, the kindness, advice, and assistance he provided to many, echoes loud and clear in the stories that mourners are sharing of him. The lives of his family remain ever changed with his sudden passing, as the head seat at his family's table has been left eternally empty. He will be deeply missed by his family, friends, and all that knew him.

A funeral service is scheduled for 11am on Wednesday May 19th at the Squamish Funeral Chapel. Observing current Covid protocols, family and friends are invited to join the service via Zoom meeting link;