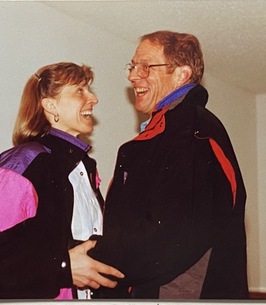 It is with great sorrow that we announce the unexpected passing of Neil Metcalf on November 9, 2021, after a brief battle with lung cancer. Neil is survived by his beloved wife, Doreen, his son Luke (Desiree), his siblings Susan (Hin), David (Linda), and Jean (Ian), and his stepchildren Clayton (Bridie), and Rachel (Paul). Neil will be sorely missed by his seven grandchildren, Valeska, Isaac, Paris, William, Alexander, Joseph, and Michael.

Born on January 19, 1952 in Vancouver, BC, Neil was the third of four children. Even as a child, Neil had a spirit of adventure. As young boys, he and his brother David were once discovered climbing out of an upstairs window, making a running jump onto the neighbour’s roof, and leaping down to the ground only to dash back home to do it again. In 1959, the family moved to Wells, BC, where they enjoyed exploring nearby Barkerville. It was here that Neil learned to ski and participated locally in both slalom and downhill races. As a young adult, Neil became a competitive downhill racer. At one point, given the choice between a ski pass and furniture for his apartment, he made the obvious choice: the ski pass.
In the late 1970s, Neil met Angela Runnals in North Vancouver. The two purchased a house in the Dunbar area of Vancouver, and went on to have several adventures together, including a narrow escape from bandits in Morocco. The greatest adventure was, perhaps, the birth of their son, Luke, in September 1985. Neil and Angela separated in 1988, and Neil moved to Squamish where he quickly established himself as an invaluable member of the community.
Neil met his wife, Doreen, in 1990 when he started working at Carney’s Waste Systems. Neil built a rancher home on Greenwood Way in 1991, then sold it to build another house next door in 1993. He and Doreen were married on March 20, 1993, and enjoyed twenty-eight and a half very happy years together. Neil and Doreen enjoyed playing squash together, frequently participating in tournaments. Whether they won or lost, they loved the comradery of the squash community.

Neil and Doreen also loved fishing, and made annual fishing expeditions to the west coast of Vancouver Island. They made multiple trips to Arizona and California with their truck and camper, and enjoyed a trip to England and France in 1999. They vacationed in Portugal and Spain in 2003. Neil also enjoyed mountain biking on the many beautiful and challenging trails in Squamish. In his “retirement,” Neil worked just enough to fund his hobbies and, as he called them, his “toys.” Neil recently took an interest in rifles, and he joined the Squamish Rod and Gun Club. He enjoyed spending hours making his own bullets and shooting at the range with new friends. He went on several hunting trips, thoroughly enjoying his walks through the woods, searching for elusive moose and deer. Whether close to home or far away, Neil’s spirit of adventure and fun was always evident.

It is possible that no one enjoyed his sense of fun as much as his grandchildren. He was incredibly generous with both his time and his resources, frequently taking the grandkids on boating adventures for gelato, or sharing his knowledge and skills by teaching them something new, or simply spending time with them. In 2018, Neil decided that his granddaughters ought to have the opportunity to travel, and he and Doreen took Valeska and Paris on an unforgettable trip to New York City.

Our hearts are grieved at Neil’s death, and he will be greatly missed by all who knew him.