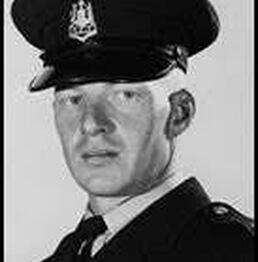 The family of Malcolm James (Jim) McEachran would like to let you know of his passing at Vancouver General Hospital in his 92nd year, on October 27, 2021.

Jim was born to James and Marion McEachran in Edmonton, Alberta on April 6, 1930. He is survived and will be missed by long-time loving companion Jane, sister Patricia, children Colleen (Charlie) and Glen (Toni), and four beloved grandchildren Patrick, Christopher, Felix, and Matthew.

Jim met and married Beverly Walkey in 1954. He joined the Vancouver Police Department in 1956. He had a long and fulfilling career with the VPD, retiring as a detective in `1991.

Throughout his life, Jim made friends with his wry sense of humour and generosity of spirit. He was proud to have watched all four of his grandchildren grown to be amazing young adults. In retirement, he remained active, traveling the world with companion Jane Wakefield, and participating several times in the World Police and Firefighter Games.

He will be missed.

In lieu of flowers donations may be sent to the Union Gospel Mission or to the Salvation Army in Vancouver.